I'm not a big cigar smoker but I do have a nice cigar once in a while. One of my favorites is Avo No.2. It's very smooth and mild cigar which doesn't leave a bad taste in your mouth. 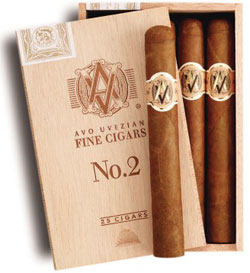 When I used to work in the Smoke Shop in Derby, CT, I used to have couple of cigars a week so I could actually talk about the cigars to the customer. I've had the good ones and as well as the bad ones. This AVO cigars is one of the best among with few others. At $6 to $8 bucks a pop, avo is one of the best valued cigars I've had.

Out of all things, I don't know why I'm talking about cigars, lol. I guess I just had one recently and wanted to give kudos to AVO cigar makes for making such a FOINEEEEEE cigar :)

If you like cigars and haven't smoked one of these yet, then spend the 8 bucks and buy one. Trust me, it's worth it. Google "Avo no.2 cigar" and you'll find plenty of people selling this cigar. Enjoy!!!